Select your hero and shoot, loot, or summon hundreds of enemies in this epic fantasy arena, survive until the end to destroy the Dark Wizard!

I'm looking for feedback to improve this game, you can leave a comment here or join my Discord https://discord.gg/XCVVkGhcxr.

Playing solo: WASD or Arrow keys to move, mouse or hotkeys 1, 2, 3 to select a skill to upgrade. The character shoots and uses the skills automatically.

Playing local PVP: Same controls for the Hero, but the summons uses the mouse to select the spells and summon the minions,

How many classes are available in Hero Battle - Fantasy Arena?

How many skills are available in Hero Battle - Fantasy Arena?

This project started as a submission to the Bullet Hell Jam, you can still play that version on my page, it's called Revenot's Conquest.

Very good game, I like it very much. There are also more types of heroes.

But it seems that the enemy's pressure is not enough, and soon I will enter a state of near invincibility, and I only need to control my position a little bit. Perhaps you can increase the number or difficulty of enemies?

Hey thanks for the feedback. I'm struggling with performance, and that's why I reduced the number of enemies spawned. But maybe this can be improved indeed. Also, the first time you play the game it is easier. It lets you pick the difficulty after that, so you can adjust to your preference :P

The base of the game feels really solid, however there are some things that could be finetuned or rebalanced:

1. I've played as fire golem. Slays everything until wave 33, where goblin shaman could not be killed simply because he is immune to fire and fire golem has no skills other then fire-based ones. Plus shaman has self-heal. Maybe need to change resists of the boss? Same stuff may apply to skeletons and ice golem since they have pretty much ice damage only.

2. Are crafted runes single-use only? i crafted some and they disappeared after one run. it's really tedious to gather mats to craft even low-level ones, let alone ++ ones. Not really worth it if it is so.

3. Archer(3 runs), ninja, wizard(3 runs), skeleton sorcerer and hunter are pretty fun. Melee classes not so much - i've played as warrior and dark knight and it's pretty hard considering slow speed and limited range of skills, i couldn't have enough defense and attack at the same time, got killed every time even before 1st boss.

4. Playing as wizard and getting cyclone skill(or how is it called, one that summons storm) crashes the game pretty fast, after several casts of the skill. Something "out of bounds" exception.

1. The absorb mechanic is necessary. I needed to get really close to the potion to pick them up which risked my HP.

2.Like my demo, the game needs to give players the skill to slay monsters in an area to boost player's game feel. Right now, the first 3-4 mins is not as rewarding.

3. I personally find zooming out the camera when there were too many monsters distracting. And the browser starts to lag. I think u need to cull the monsters outside of the camera to boost the performance.

4. need some real hit VFX or screen shake when the player gets damaged.

Overall I think this game has potential man !!

Hey, thanks a lot for checking my game, and for the precious feedback!

1. Yeah, that's coming on the next update

2. I'll think of something. My initial idea was to release it also on mobile, but due to performance I don't think this is going to happen, so I have the mouse free now :P

4. Cool, more people already told me about not noticing when they get hit, I thought the bigger health bar at the bottom of the screen was enough, but a screen shake is much better!

I'll post the updates on my newly created Discord Channel, if you want to join here's the link https://discord.gg/JMPTpq72

Some things that can be improved:

- I had some problems with the fps

- Once you have enough movement and attack speed, you can circle near the edges and that makes it a bit monotonous

- It also happened to me that when I opened the tips menu, the inventory did not let me read them properly

Hey thanks a lot for your comments, and for checking in as I asked :P

Yeah, the FPS can be an issue with the web version, I'm working on a desktop version now, but I'm also trying to improve it for the web.

Have you managed to kill any bosses, or got to the point when enemies start shooting projectiles? This should spice up things.

Sorry about the tips menu, I completely forgot about that when adding the inventory.

You can join muy newly created Discord Channel to keep up with the updates https://discord.gg/JMPTpq72

Yeah, the desktop version should work much better

About your cuestion, yes, i killed 3 bosses. I started using that strategy after killing the first one

Some things to improve:

Hey thanks a lot for your comments, and for checking in as I asked :P

Indeed I tried to reduce the textures as much as possible to reduce build size, but I should recheck how they look overall.

Good idea about turning off the colliders; it completely slipped my mind.

I'll check about the sounds as well. You're not the first person to complain about it being too loud.

You can join muy newly created Discord Channel to keep up with the updates https://discord.gg/JMPTpq72

I played again as the archer and found the game pretty fun. The defense stat is probably one of the better ones in this game. It's much easier to protect yourself from damage, vs deal enough damage to kill everyone.

I'm thinking it's probably the key to surviving in the long term.

I felt the game could really use some form of ability to draw in pickups. Maybe none of the characters I played had one?

I like your ad system that lets people play characters they haven't unlocked yet. This is creative.

Yeah, this is a good game.

Hey thanks a lot for your feedback. I'll reply both in a single comment.

The paladin attacks have a shotgun sound indeed! Lol, I didn't have an SFX available for hammers...
I realize that it's not immediately clear that the player shoots automatically, I thought the skill cooldown would explain that, but maybe I need to think of something else.

I liked your idea about the health potions giving some extra benefit if you pick them up with full health. I'll add that to my to-do list.
I also thought about providing more information on the level up screen about the skills, but it became overwhelming, so I kept it simple. Maybe I'll add it on the class selection?
I also get that error sometimes, I'm trying to figure it out thanks for sending it!
Indeed the defense is one of the best upgrades you can have for the long run, it becomes overpowerful with melee classes, and is something I need to balance...
I also recently launched an update with a skill to raise pick up range, but I understand you mean one skill that picks up all items on the ground, right? I'll maybe add an item for that.
I'm working on the PC version now, if you want to follow new updates please join my recently creates Discord channel https://discord.gg/XCVVkGhcxr

The presentation on this game is off the charts. You've got a little video playing on the menu? That's amazing. Kudos for that.

So I played as a paladin and my hammer has shotgun sounds? It's a pretty loud sound effect. Am I meant to be shooting people? Well, maybe this class is a WIP.

It's a bit unclear how you attack, too. I realized after playing that you just kinda wander around and this is an auto attacker game.

I like the animations. The enemies have clean attack frames.

We should really get a reward for picking up a potion when at full health. A damage boost, perhaps? Extra temporary health that's subtracted before our actual health, maybe.

A potion you accidentally collect is wasted otherwise.

It would be nice to have indications of which abilities are skills and which are upgrades.


While playing the Paladin, I got to level 18, but then the game crashed. This was the error message.

An error occurred running the Unity content on this page. See your browser JavaScript console for more info. The error was:

RuntimeError: index out of bounds

Nice take on the genre! I think there's a lot of room for 3d games in this space and it's good to see it being explored. There do seem to be some performance issues however, once there's more than a few enemies on screen. By wave 7 for me it was pretty much unplayable on my laptop. The upgrade paths were nicely varied, and the skills felt well balanced. I would add maybe a bit more feedback when you get hit though, as I found I didn't notice it most of the time.

Hey thanks for playing and for the feedback!
Indeed on the web it becomes slower and slower as you progress. You can disable the dynamic camera on the settings, but it only helps a little. I'm working on a PC version to make sure the performance is optimal.
I also launched a few updates in the last couple days you might want to check them out.

I recently made a Discord channel, if you want to join I'm posting the updates there. https://discord.gg/XCVVkGhcxr
Keep tuned!

Amazing visuals and superb concept! Everything from UI to game effects was extremely easy to read and understand. Managed to get to Wave 17 and definitely had an amazing time. However, the only small critique I have is the fps drop whenever a huge group of enemies are in the screen view.

Hey tyvm for playing my game!

I have put a lot of optimization, and the enemies stop spawning when the FPS drops too low, but unfortunately, WebGL can't handle well that many meshes!

I hope to create a PC build soon, it will be much heavier, but I think I can make it lag-free. 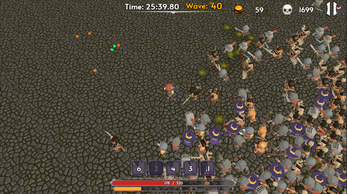 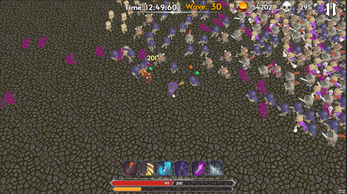 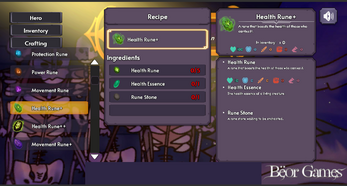 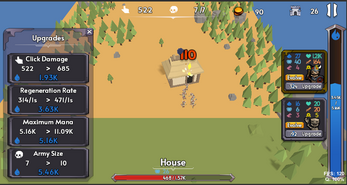